Frank Brodie is a U.S. game warden in the Wildlife Special Services Group, an agency formed jointly by the US Fish & Wildlife Service and Homeland Security to investigate unique and bizarre wildlife-related cases, such as the cloning of extinct species and weaponized viruses... Frank Brodie takes on these threats and more in this new series of thrillers. 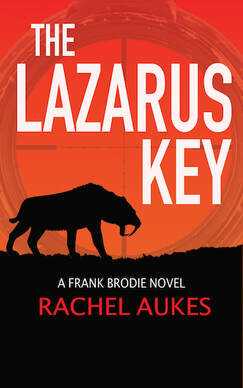 (This is a cover mockup and NOT the final cover)

In ten years as a U. S. game warden, Frank Brodie has never let a poacher escape, never lost a trail, and never came across an animal print she didn’t know. That is, until the day she tracks a real-life saber tooth tiger being hunted in Yellowstone National Park. The next day, she's reassigned to the Wildlife and Animal Special Protection Service (WASP), where she learns there are even more once-extinct predators being revived for hunts on American soil. But there is something off about these new creations. They aren't just clones of extinct animals--they're something terrifyingly new. ​Frank and her team at the WASP must hunt down the mad scientist responsible before he unleashes a species that will bring ecological disaster.

The Wildlife and Animal Special Protection Service (WASP) is a special task force formed jointly by the Department of Homeland Security and the US Fish and Wildlife Service. Their purpose: to provide a highly trained, rapid response team on missions on cases involving wildlife that could pose a threat to the United States.  These threats include cloning, gene manipulation, bioterrorism, transgenics, cryptozoology, and anything else connected to wildlife. The task force is trained to handle cases in aquatic, forest, urban, arctic, mountainous, and desert environments.

The idea for the WASP came to Lou Ashford and Zoe Hardisty when they came across a cryptic called the Mothman in West Virginia. After years of planning and selling their idea, the WASP was finally approved as a small, temporary task force, with Lou serving as Director, and Zoe as the team's case manager. Their first hire was Terry "Wash" Washington, a talented technologist who handles the team's computers, conducting research and searches. Dr. Kate Davis, the team's biosciences lead, was hired the next day. The following week, Lou transferred Murphy Barnes, a South Dakota game warden, to serve as the WASP's field agent. The WASP operated with only five team members--all their budget would allow--for over a year. During that time, they leveraged subject matter experts and a small network of veterinarians and game wardens across the country called "sentinels."

When Murphy along with a Wyoming game warden named Frank Brodie tracked poachers hunting a saber tooth tiger in Yellowstone, Lou was approved to add a second field agent--Frank Brodie--for the duration of the case. That brings the WASP up to six team members, all of whom are the best in their area of expertise. But they're woefully understaffed for what and who they're about to go up against.

Think of Frank and Murphy as the X-Files, if Scully and Mulder investigated cryptids and other bizarre, unexplained wildlife and natural phenomena rather than UFOs and aliens. ​

Don't take my word for it. Go ahead, give it a try. Club members get access to exclusive sneak peeks, contests, and sales. You'll receive 6-7 email per year, spam-free and your email address will never, ever be shared.

You have successfully joined the Readers Club. You'll receive an email shortly.